Why it's important to take care of your mental health

Hi. I’m Sarah. I’ve lived with type 1 diabetes for over 30 years now. I often hear comments like, “Oh, I couldn’t do what you do!”, Or “I don’t know how you keep it all straight!” or “I admire you-you're so courageous and resilient with all that you go through! Give yourself some credit, girl!”

I have battled with depression, though, as a teenager around diabetes. Admittedly, I attempted suicide at one point, though it was unsuccessful. I chickened out, but I never told anyone about it either. I was too ashamed.

Putting on a brave face

For years, I’ve tried to keep up the front of strength and determination. Sharing and believing that I wouldn’t let diabetes hold me back from anything - that I do things a bit differently than others… which is true. I’ve tried to maintain a positive attitude, believing (at least to some degree) that if I only saw the positivity, that I wouldn’t be susceptible to burnout.  That, while I would encounter times of down-in-the-dumps slumps and toddler-like temper tantrums toward diabetes, that I would be okay in the end. After all, those moments never really lasted more than a week or two.

Still, something was pulling at me. A little seed of depression, guilt, or anger, and the feeling of just not wanting to live like this any longer that stayed planted in the back of my mind. It would rear it’s ugly head sometimes, but only for a few moments. I’d have a good cry and do what I always did - push it to the back burner,  “straighten myself up,” then choose to ignore it again. Mostly because I didn’t know how to process it, but also because I didn’t want to face it either.

I was on a work trip, training another super awesome mySugr Support Hero, I realized I left my extra insulin at home. Thankfully, I work with other people with diabetes, so they pitched in and had my back while I was there. Then, a couple of days in, and for whatever reason, my insulin pump failed. It seemed to be working okay, but it wasn’t. A massive headache ensued, and my sugar was in the upper 300’s. I thought, “Here we go again!”, begrudgingly. That night was one of the worst nights I’ve ever had. I should have gone to the emergency room in truth, but I was to be on an episode of "Live, with Scott!" the next day, and I didn’t want to disappoint! We'd planned it for weeks. So, in my room, I stayed up, sipping water and vomiting, shaking with chills and every square inch of me in pain --- all the signs of impending DKA… but I was so freaking hard-headed. Thank heavens for Jenn, another awesome Support team hero (but for real, too), who stayed up with me until my BG came back down, and who took on a “motherly” role of making me drink water… and threatening to take me to the ER if I didn’t get better. I still battled mild-to-high ketones the rest of the week, until I finally called my endo back home and begged him to call in insulin pens. I had already done everything I could with the pump, but nothing was working. I went home angry and resentful of the device I had come to trust so much.

Raw and resentful at home

When I got home, I wanted nothing more than to reach out to my loving, adoring husband and for him to just hold me. But I stopped myself out of the habit of being “strong”... the habit of not letting the emotions show… the habit of “my diabetes is my burden, not anyone else’s.” The memory of that single moment of denying myself to reach out still plays out in my mind brings me to tears. Weeks went by, and even though I thought I was okay diabetes-wise, I wasn’t mentally. What happened on that trip caused that seed to begin growing out of control. I could no longer ignore it and put it on the back burner. I became depressed - more depressed than I have ever been in my life. I would cry at random times. Every injection reminded me of just how much my life depended on this tiny bit of substance I was putting into myself each time. That without insulin, I could be dead within a day or so. Remembering the pain I had been in that night would always come to mind, too, reminding me of how painful the death would be without insulin. Not fast, but slow and agonizing. The weight of it all was just too much. November 22nd was my 30 year “diaversary.” Before this trip, I was trying to think of something to commemorate the “milestone,” but by the time came, the more and more I resented it.

One night, after work, when the kids were watching TV, and my husband was getting supper started, I just went to my room and bawled my eyes out. I couldn’t take it anymore -- the backpack of depression was just too much to carry. I have never felt so trapped in my entire life. The weight of realizing that I would never, ever know life without diabetes, and the only way to not have diabetes was not to be alive... Felt like the wall was closing on both sides with no escape. That was it. I had my breakdown. I was utterly at the very bottom of the proverbial barrel with no courage or strength to go any further that night. It was as if my body had given way to everything I had been fighting to push against. I didn’t want to live but yet I did want to at the same time. I just wanted to be free. I reached out through a text to my best friend. I didn’t know what else to do. She talked me through it but urged me to seek help. It wasn’t the first time she did, but she was much more insistent.

Reaching out for help

After a few days, I finally (nervously) reached out to the Center for Diabetes and Mental Health, who put me in touch with someone local to me. Doing this was one of the hardest things I’ve ever had to do in my life. It was the ultimate admission to myself that I couldn’t do it alone anymore. I knew I needed to, though, not just for my family or the sake of my friends’ sanity, but for me. I’ve been seeing someone now for a while now. Piece by piece, She's been taking apart a lot of the emotions and helping me sort them all out. I came to her with my tangled-up ball of Christmas lights, and she’s slowly helping me untangle them. She’s fantastic at helping me connect dots where I didn’t know dots even existed. I’m not going to lie, though. There were times when the exercises we worked through were just plain weird to me… like talking to my failed pump as if it were a person and telling it just how I felt -- how it made me feel. I felt so stupid, but by the end of the exercise, it was sort of… freeing. One thing that makes it easier for me is that her services are through the computer - through a secure web video platform where we can chat remotely. The computer access helps a lot because, in all honesty, I’m sure I would have hesitated a bit more in-person. I feel that I can open up more in the comfort of my own home rather than in an office setting somewhere. Plus, there are no other people around if my face is all puffy and red from bawling my eyes out after a session. I’m also on medication for now, and I’ve taken to meditation and yoga too. I’ve learned that deep breathing can help so much because it forces you to stop and practice the pause. It’s like that internal reset button for me and was the most significant actionable learning I’ve gained during this time. Journaling is a must for me, too. Just as in my blogging days, it's what helps me “sort the crap” and focus on the good. It’s a powerful thing to write down, “Diabetes, you sucked today! I hate how you made me feel vulnerable in front of everyone!” or “Thanks for playing nice today - I appreciated the break!”

Seeking mental help was a big step for me because the stigma that is around “seeking help” is still too much — especially coming from the background that I do. I felt as if I had failed at “being strong,” when the truth was, I was ignoring how it was all weighing me down to where my mind couldn’t be healthy anymore. Now, I’m a big advocate for seeing someone to check in on your mental health. I’m still not back to where I’d like to be, but I’m so much better than I was just a few months ago. I wish it could be a part of diabetes therapy anyway along with quarterly checkups at the endocrinologist. Diabetes is a HUGE responsibility. We shouldn’t have to do diabetes on our own without some coping strategies or even just a check-in along the way. And I would empower anyone who is reading to speak up about mental health at your appointments. It’s okay not to be okay sometimes, but don’t let it go on and fester inside of you. As my counselor said, we all see people who seem to have it together all or most of the time, but in reality, we’re all battling things, and it’s okay to need help sorting it out. Diabetes and the day-to-day stress is not something to just let sit as a little seed without tending to it; because at some point, seeds grow. Take care of you – all of you – head to toe, mental and physical; The peanut butter and jelly of who you are. And remember to breathe. 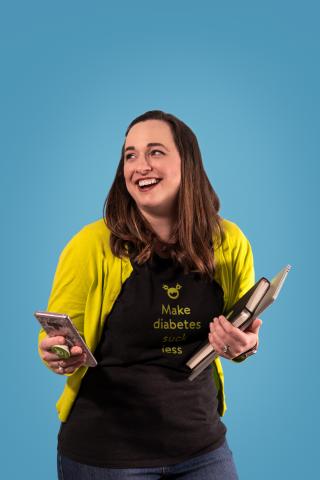 Sarah Knotts is a lover of all things technology, especially when it comes to devices that help people living with diabetes. She is better known in the diabetes online space as Sugabetic and occasionally writes in her blog when she has a free moment. She’s lived with Type 1 diabetes for almost 30 years and is the Head of Customer Support USA for mySugr.

Nobody really likes to talk about long term complications of diabetes. It...

Here at mySugr, we know that managing diabetes is more than just...